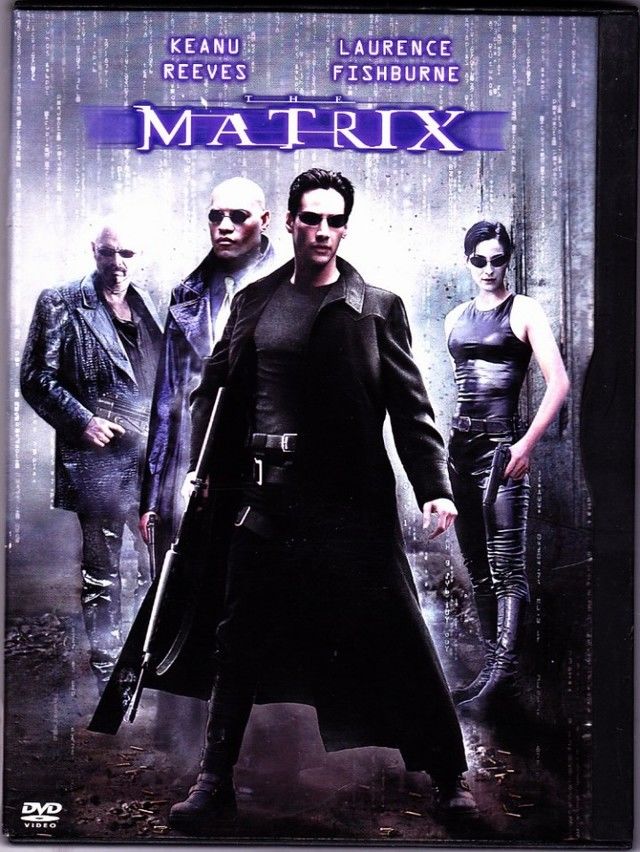 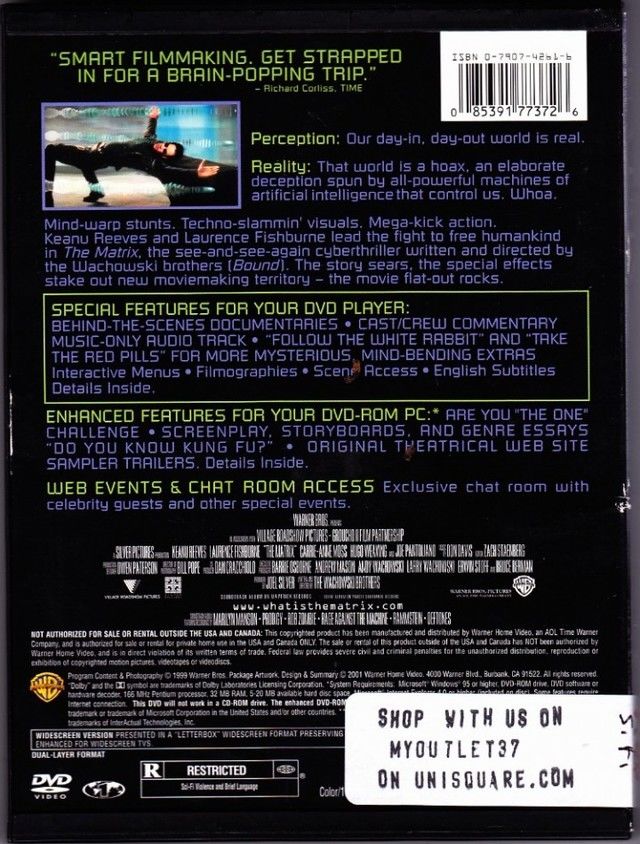 USPS 1st-Class Mail: $4.83
USPS Global 1st-Class Mail: $22.86
Ships To:  Worldwide
Shipping and Handling: USPS - Combined shipping is available !!!
0 units sold
No product attributes have been entered for this item.
No warranty info available for this item.
Policy in their original condition within 7 days and the buyer will pay for return shipping. There is a return fee of $0.50.Return Fee $0.5

Up for sale is this DVD in Good condition, includes original Disc's, Art work & case.

All DVD's, CD's, Blu-ray's & Video Games that are 2nd hand are tested & guaranteed to work.

Buy yours today, quantities are limited !!!

Item may or may not include digital codes.

. Product Information With THE MATRIX, the Wachowskis have established themselves as innovative filmmakers who push the boundaries of live-action films. Like the groundbreaking STAR WARS, THE MATRIX (also the first film of a trilogy) showcases a unique visual style, one the Wachowskis achieved through an array of techniques and digital effects, some never before seen in mainstream Hollywood films. Although computer morphing technology had been used before in films such as THE ABYSS and TERMINATOR 2, the Wachowskis were the first to use "bullet time," a time-bending digital effect that utilizes both computer-generated imagery and still photography. The film itself is a complex story that aspires to mythology, focusing on a computer hacker named Neo (Keanu Reeves) who searches for the truth behind the mysterious force known as the Matrix. He finds his answer with a group of strangers led by the charismatic Morpheus (Laurence Fishburne). What they encounter in confronting that truth makes for a lightning-paced, eye-popping thrill ride of a movie. Packed with stunning fight scenes (choreographed by accomplished Hong Kong director Yuen Wo-Ping), astonishing visual effects, quotable lines, and a terrific supporting cast (led by Carrie-Anne Moss, in her first major Hollywood film), THE MATRIX is a bold triumph that raises the bar for all science fiction films. Product Identifiers UPC 085391773726 Format DVD Genre Sci-Fi & Fantasy Director Larry Wachowski, Andy Wachowski Rating R, R (MPAA) Leading Role Laurence Fishburne, Carrie-Anne Moss, Keanu Reeves Signal Standard Dvd Film Country USA Release Date 19990921 Region Code Region 1 Number of Discs 1 .

***** Shipping and Handling: USPS with tracking number - Is the only way we ship items. Combined shipping discount is available !!!

**** Donations: We donate 10% of all proceeds to ASPCA. What is ASPCA? The ASPCA is a national leader in animal rescue and protection, working tirelessly to put an end to animal abuse and neglect. You can help fight cruelty and give animals nationwide a second chance at life, when you purchase items from us. Donations are done on a quarterly bases.

RETURNS: Are accepted with in 14 days of purchase, Brand New items must remain factory sealed or a restock fee of 50% will be deducted. All other items must be in same condition as sold in. Items must be returned at buyers cost to ship. Refund of money or substitution of item equal in value is buyers choice. Shipping will not be refunded.

We have been selling online since 2002.

***WE HAVE THOUSANDS OF ITEMS LISTED***

See our store for many more amazing items.