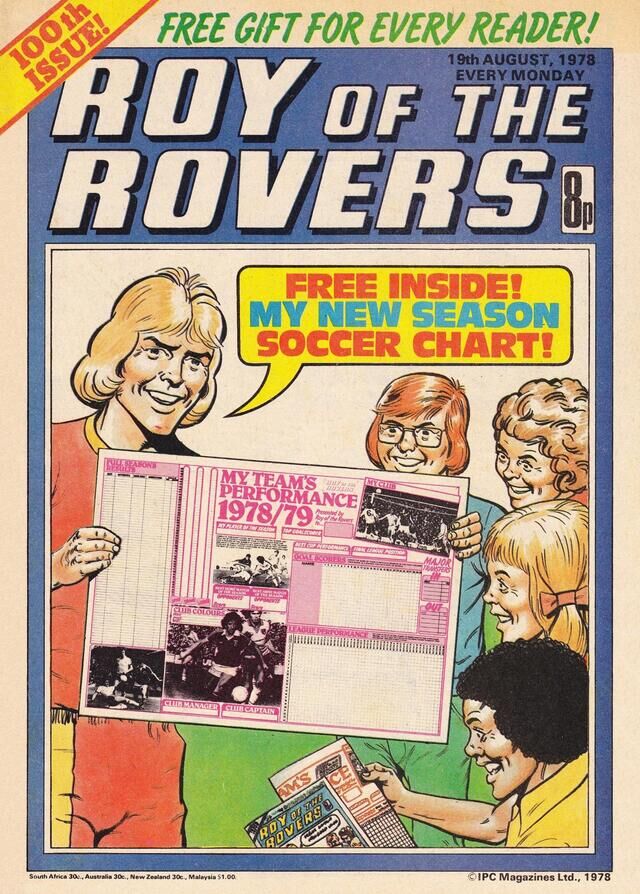 Roy Of The Rovers

Roy of the Rovers is a British comic strip about the life and times of a fictional footballer named Roy Race, who played for Melchester Rovers. The strip first appeared in the Tiger in 1954, before giving its name to a weekly (and later monthly) comic magazine, published by IPC and Fleetway from 1976 until 1995, in which it was the main feature.

The weekly strip ran until 1993, following Roy's playing career until its conclusion after he lost his left foot in a helicopter crash. When the monthly comic was launched later that year the focus switched to Roy's son, Rocky, who also played for Melchester. This publication was short-lived, and folded after only 19 issues. The adventures of the Race family were subsequently featured in the monthly Match of the Day football magazine, in which father and son were reunited as manager and player respectively. These strips began in 1997 and continued until the magazine's closure in May 2001.

Football-themed stories were a staple of British comics from the 1950s onwards, and Roy of the Rovers was one of the most popular.[1] To keep the strip exciting, Melchester was almost every year either competing for major honours or struggling against relegation to a lower division. The strip followed the structure of the football season, thus there were several months each year when there was no football. By far the most common summer storyline saw Melchester touring a fictional country in an exotic part of the world, often South America, where they would invariably be kidnapped and held to ransom. The average reader probably stayed with the comic for only three or four years, therefore storylines were recycled; during the first ten years of his playing career, Roy was kidnapped at least five times.

The stock media phrase "real 'Roy of the Rovers' stuff" is often used by football writers, commentators and fans when describing displays of great skill, or results that go against the odds, in reference to the dramatic storylines that were the strip's trademark.

Roy Of The Rovers